So, obviously, substantive posts have been a bit scarce of late. I'd like to turn that around, both because and by means of the HM conference I attended in NYC last week. Because: it was one of the very best conferences I've ever attended, and certainly the very best Lefty, is-it-academia-or-is-it-activism sort of conference I've ever attended. By means of: I'm hoping it will be easy enough for me to half report on, half respond to what I saw and heard there, and generally to spin the experience out into a set of reflections on this, that, and the other.

First up: the matrix of historicisms.

This is an attempt to present in a more articulate manner the introductory remarks to my paper on Virno and Aristotle, which were marred by my inability to remember how to draw a simple matrix on the chalkboard.

My talk was to have been, to some extent, concerned with the “family politics” of communists – the friends and enemies, lineages and filiations, by which we construct our identities. In asking about and proposing to discuss Aristotle’s communism, I wanted to avoid – or at least postpone drawing – the seemingly foregone conclusion that Aristotle was in his day, and is even now one of the preeminent anti-communists: critic of Plato’s communist scheme, defender of private property and slavery, basing his entire ontology on the “substance” of the landed proprietor. Either he is no ancestor at all, or, if some distant consanguinity must be admitted, then it must just as surely be renounced, and any holdings that come down from it sold off, used up, or simply abandoned to the elements. Besides, the anti-communists seem more than happy to enshrine Aristotle alongside their honored dead.

Amongst socialist and communist authors, similarly – and this is the second, and more interesting, complication – Aristotle’s situation tends to vary depending upon a prior determination of the character of the anti-capitalist movement. In particular, it seems to depend upon how capitalism and anti-capitalism are situated in history. To employ a simplifying schematism, it seems to me that you can force anti-capitalists to answer two questions about history and classify them on the basis of their answers.

Question 1: Is the anti-capitalist movement an attempt to realize a break in history that has already occured at some point in the past?

Question 2: Would the victory of the anti-capitalist movement constitute or presuppose a break in history that is yet to come?

Answers can be plotted in a matrix: 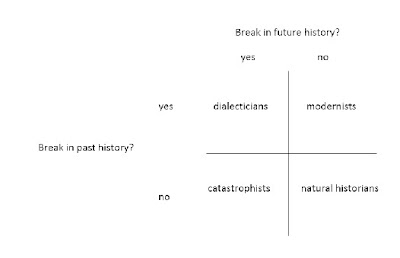 "Modernists" (Hans Blumenberg, Deleuze perhaps, and certainly many Deleuzians, Negri at times) see the struggle against capitalism as the struggle to extend or realize the historical rupture that inaugurated modernity. The problem with capitalism, then, is that it represents a lingering past. Since Aristotle is almost certainly part of this pre-modern past that lingers on and must be overcome, Aristotle is an enemy of modernists. (Marx's exhortation to let the dead bury their dead might be the fountainhead of this progressivism.)

"Catastrophists" (Horkheimer and Adorno anyone?) see history as monotononous and relentless and devoid of promise, and see the overcoming of capitalism as the unprecedented inauguration of something new, a break with all that has come before. (Marx's claim in the 1859 Preface that the end of capitalism will mark the end of pre-history might be read as precedent here.)

"Dialecticians" (Murray, Meikle, Postone, Arthur, and even Althusser at times) see capitalism as the manifestation of a historical rupture that must itself be suppressed, dismissed, repeated, or otherwise cancelled. The era of capitalism is an interregnum. Use-value romantics reside here, but so do most of the folks I most admire. Not all of them are Catholic, but a rather large percentage are. These are the friends of Aristotle, who was the first to criticize exchange because it abstracts from concrete usefulness.

"Natural Historians" (Virno, Althusser at other times) don't believe in historical ruptures, epochal befores and afters. The break between capitalism and communism is not a break between histories (eras) so much as a break within every history. The field of history is not, on this approach, subject to the sorts of progressions, leaps, or returns that characterize the pro- and anti-modernization stances taken by those situated in the other quadrants of the matrix. Because communism is not a referendum on modernity, Aristotle is not subject to valorization or condemnation for his proto- or anti-modern tendencies. Instead, there is a certain freedom to approach Aristotle – or any other thinker, for that matter – in a non-reductive way. What Virno says of Simondon could be said also of Aristotle: “At a certain point it is necessary to take leave of him and proceed alone (just as we must depart from many other ‘friendly’ thinkers). We do so with gratitude for his help but without nostalgia or regrets.”
at 9:36 AM