G.A. Cohen In Memoriam: A Critical Celebration of His Life and Work 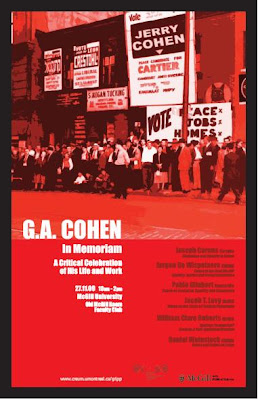 
I don't know that this is the actual order in which we'll be speaking* -- an earlier version of the program had Roberts and Levy going first and second. Regardless, come for the whole thing.

By the way, I feel a little odd being the only person who didn't include Cohen's name in the title of his talk, but if it makes a difference, my talk also has an alternate title: "What Bullshit Marxists Can Learn from Cohen." (You can tell, perhaps, why that is not on the program.)

14h30-16h
Pablo Gilabert: Cohen on Socialism, Equality, and Community
Daniel Weinstock: Cohen and Cohen on Jokes
at 8:52 AM