Another Brush With Infamy 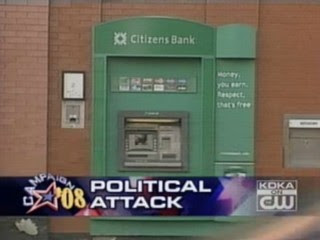 Ashley Todd's encounter with the dark phantom menace in her own mind was supposed to have occurred at my old ATM in Pittsburgh. Why, I was just there last Friday closing an old account. The Citizens Bank stands at the corner of Pearl and Liberty, in the heart of Bloomfield, Pittsburgh's Little Italy. just across Pearl Street is my favorite Thai restaurant in the 'burgh, the not so imaginatively named Thai Cuisine. Yummy curries. Cross Liberty on Pearl, go four blocks, and the powder blue house on the left (the one with the yellow door) is where I lived a few years back.

Anyway, anyone with even a passing knowledge of that ATM and that neighborhood must have known right away that Ms. Todd's strange encounter with a militant, knife-wielding Obama supporter was almost certain fiction (not to mention bad fiction). At 9 pm on a Wednesday night in mid-October, she's supposed to be attacked by a large black man wearing only a black undershirt, on a busy street, in front of a bank that literaly bristles with security cameras (check out Google streetview if you don't believe me). Uh-huh.
at 9:06 AM